Even before receiving an education as an international folk dance instructor in 1977 Maurits van Geel started to teach in 1972 folk dance in high school. It is clear that his passion for folk dance was already present at a young age and it never extinguished.

Mid-seventies he took over the leadership of an performance group which was renamed Hupsakee. He made a number of choreographies for the group which performed all over the world at festivals and focused on a repertoire of Dutch dances. He remained active as the artistic leader for almost 20 years. In the 1980-ies he received  a scholarship of the Dutch Ministry of Culture and specialized in the United States in Appalachian clogging. As a guest teacher he taught workshops clogging in several European countries, a dance form which was relatively unknown in the European folk dance scene at that point. He also made clogging choreographies for a number of performance groups in The Netherlands and received a degree as Dance Academy graduate in 1986 without being required to sign up as a student.

His involvement in the promotion of dance came to full bloom during his 2-year contract as dance consultant for the city of Amsterdam. In this capacity he initiated dance projects in schools in combination with setting up dance projects for cultural minorities besides teaching courses of international folk dance in Amsterdam.

In the professional field he was invited as guest teacher at the Rotterdam Dance Academy, but the major part of his professional life he worked for Het Internationaal Danstheater, a professional dance company based in Amsterdam.

First as choreographer,  later as assistant artistic director and eventually as artistic director he was employed from 1988 to 2011. During this interval, he directed 47 different theatre productions in The Netherlands and special productions presented at foreign tours. Part of his job involved extensive dance research all over the world in order to prepare for these programs. This intensive job forced him to take a break from teaching recreational folk dance in 1990, although he was still leading the Dutch performance group for a number of years. Maurits decided to leave as artistic director January 2011 and went back to his old passion, teaching as a guest teacher at amateur groups.

He acted as an assessor for the Canadian Arts Council in Montréal, Canada, performed a number of times as judge at the Büyükcekmece Culture and Art Festival in Turkey and at Llangollen International Music Eisteddfod Festival in Wales. In the Netherlands he was active as a jury member at dance festivals for minorities set up by the Arts Foundation of Rotterdam and as a board or committee member of various Dutch organizations in the field of dance.

Through his travels and research he developed a particular interest in the Roma culture and the ethnic diversity of the Caucasus, which lead to the production of a CD with folk dances from the Caucasus and a CD with Roma dances. His travels have included India, Pakistan, Turkey, Russia, China, England, France, Armenia, Azerbaijan, Georgia, Ossetia, Uzbekistan, Turkmenistan, Tajikistan and Cherkassy, among others.

After taking up teaching again he has also choreographed many dances, one of which is Syrtós Kitrínou (Greek), currently passed on and popular in many countries.
In the past years, Maurits and Tineke have often been teaching together, each with their own specialty. Maurits was guest teacher in Taiwan, Hong Kong, Singapore, Malaysia and in a large number of European countries.

In November 2017 Maurits was appointed Ridder in de Orde van Oranje Nassau, a high royal award for his vast contribution in the field of dance. 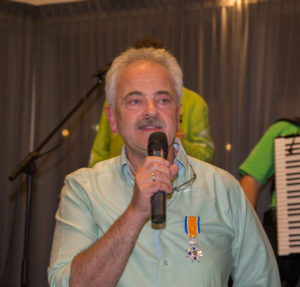 Originally educated at the Rietveld Art Academy in Amsterdam - when not dancing - Maurits enjoys to make wood objects.  If you are curious to see his art work, please visit: